Been veiwing fellow Bloggers reports on Salute and am a bit ashamed to contribute my own rather modest effort .... 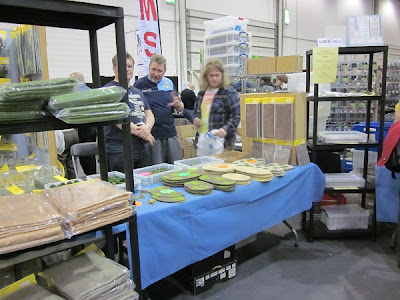 Travelled  down with 'A' to help 'S' and his son 'O' man the S&A Scenics stand , set off about tea time on the Friday night and travelled down to a hotel on the M25 near Harlow . A bit of a journey because of the Friday night rush hour but we met up with 'S' and 'O' at the pub next to the hotel just in time to see them polishing off a bottle of wine - barely had time to order our drinks before they were ringing last orders. After a somewhat poor sleep (very noisy main road outside our room ) we were up a 5.30am and on the road by 6.15am to Excel Centre. 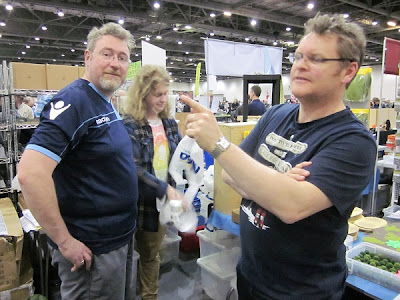 We had the usual trouble of finding the entrance to Excel (we get it wrong every year), but unloading was fairly painless as you can drive the van right up to the stand to unload . 'S's display stand seems to alter every show so I stood somewhat bemused as the best way to set it up was thought out - after several trial runs to maximise the selling area we finally got it erected (above we see S&A staff busy at work)(last time I took photos of our group 'A's wife remarked on the expanding waist lines - think it was a trick of the light and my camera at fault!) 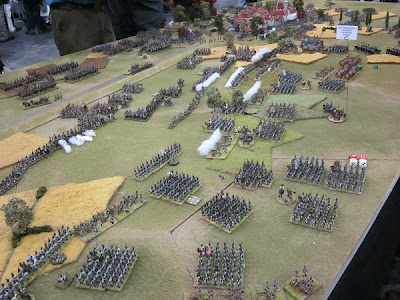 When the stand was up I shot off to make my purchases before the show started (well we abandoned 'S' who was trying to decide were the best place was to display large flocked hills). Having got the things I wanted just got back to the stand when the doors opened and all hell broke loose and in poured the public . Apart from the odd break to go to the loo we where kept busy into the afternoon , so it was not till then did I get another look round - and I remembered I had brought my camera to record the occasion . (nice 15mm Napoleonic General De Brigade game above and below) 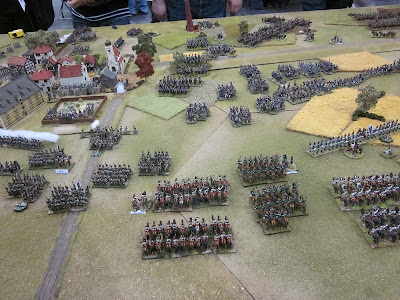 This year I had brought some ready made sandwiches from my local Asda for lunch as I was alarmed at the price of catering in London , but ended up getting a hot pie and peas anyway !. 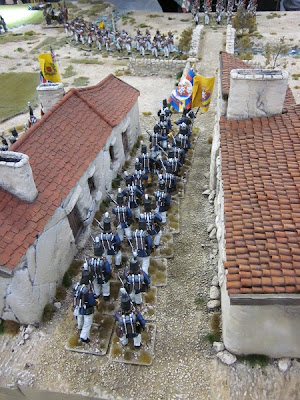 I was impressed by the quantity and quality of the games on show (above and below a Napoleonic game using Victrix 54mm figures) and was sorry not to do them justice by spending more time looking and taking photos. 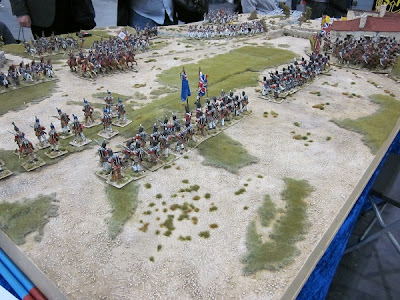 We were busy all day with people purchasing thing right up to closing time . There was the inevitable wait for the room to be cleared of the public before they would let the vans in to start loading up , so it was after 6pm when we hit the road for the return journey . It is then that you realise that London is a long way away from the North and home ! . It was a long but uneventful journey back with one stop for a disappointing burger (are they not always- but I succumb every time !) and 'A' dropped me off home at 11pmish - a long and by then tiring day , but a successful show and experience . 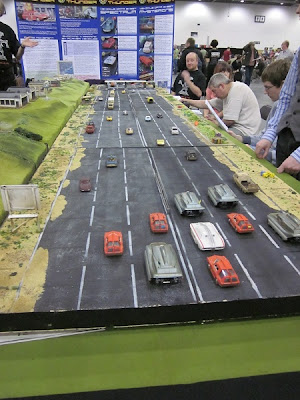