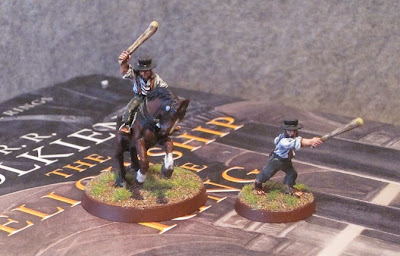 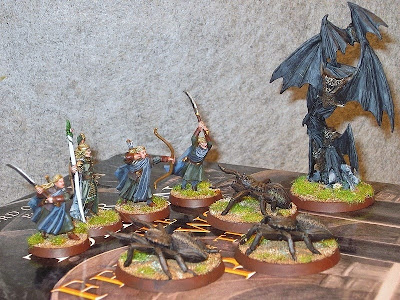 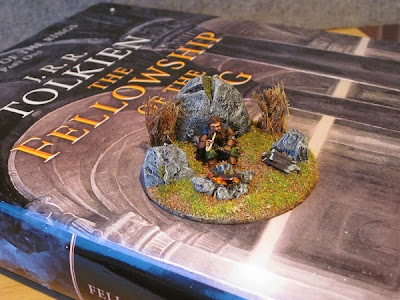 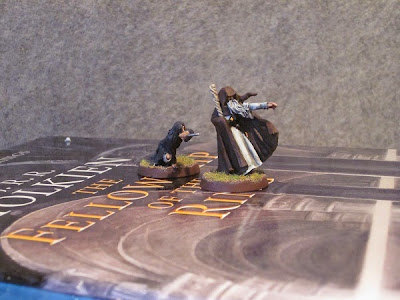 'He's behind you !' Sharkey (Sauruman) and Wormtongue .
Have quite a lot of figure to go at , surprised myself  how much I  have in store - which is just as well when you see today's prices and the number of figures now not presently available , also I'm not sure of the GW 's move to 'Finecast ' resin although I  have not sampled them yet. So I'm off to tidy up some Hobbit Militia ready for painting .
Posted by Mosstrooper at 08:03 4 comments:

Christmas Greetings To One And All.

The warring fractions of Treboria , Ferraro Rocca and Fetaland are having a seasonal truce and have come together to wish you all a Merry Christmas .(click on photo to enlarge) 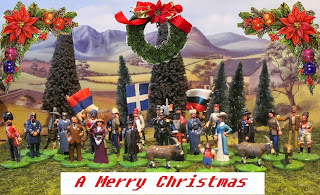 I can hardly wait ! . Looks like it is going to be of the same quality as The Lord of the Rings . 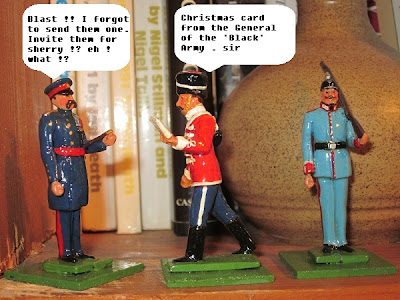 A message is delivered to the 'Red 'Army HQ . ( click on photo to enlarge) 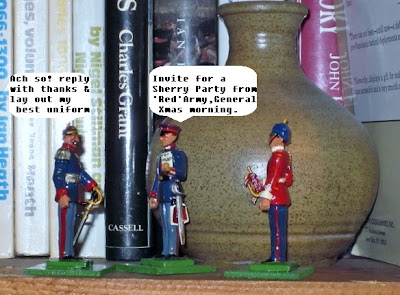 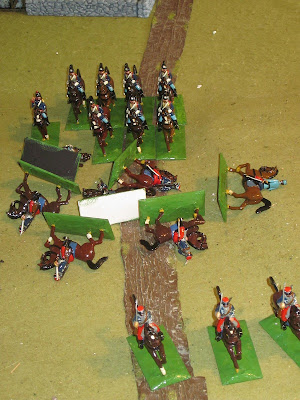 The cavalry clash - and it ends in disaster for Treboria . 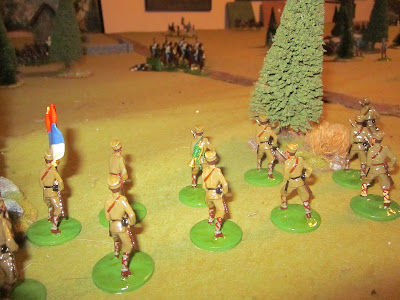 Treborian infantry hidden in nearby woods cover their cavalry's retreat. 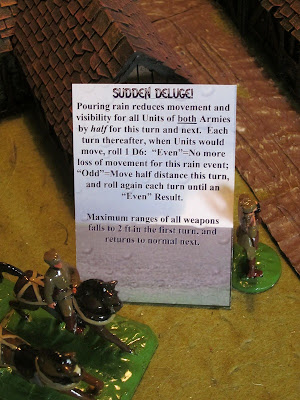 Another card is drawn - this slows movement next move. 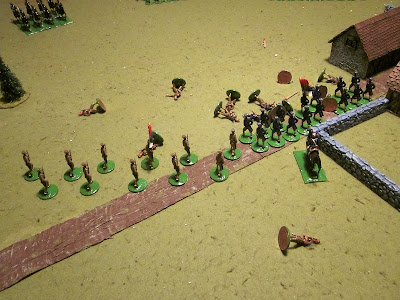 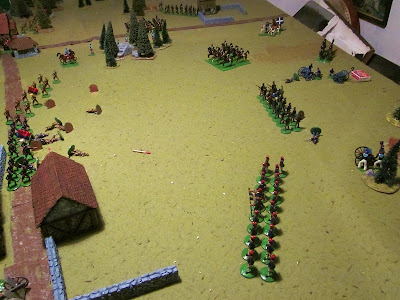 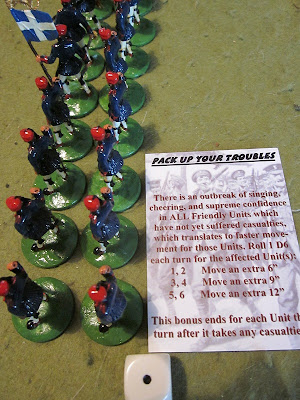 Yet another card - troops begin to sing 'Fetaland Forever' which inspires the army to move forward faster !. 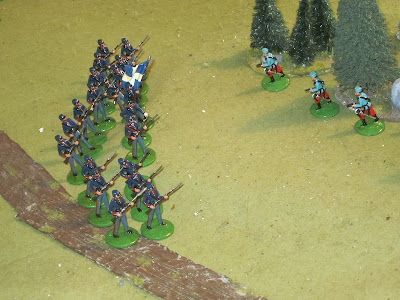 On the other flank Fetaland infantry rushes forward . 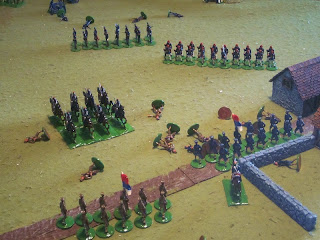 Fetaland Hussars charge the Treborian line as their infantry close in for the kill. 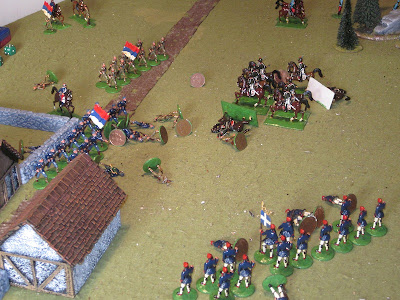 They are repulsed with heavy losses . 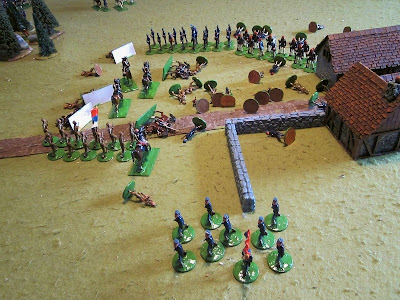 The Treborian Reservists break and its all over for Treboria . 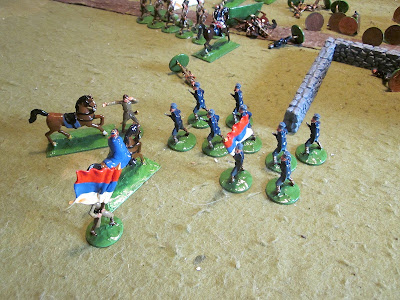 General Hagen Dazcs tries to rally them- but its victory to Fetaland. Great game ! the Fetaland artillery won it for them , they hardly missed a shot and caused heavy casualties on the Treborian centre , this combine with the cavalry routing the Treborian elite Hussars sealed the game for them !. The cards worked well adding another level of uncertainty which is especially needed when playing solo. Whilst designed for garden gaming most of the cards can be used - with a little thought on the wargaming table.
Posted by Mosstrooper at 02:11 1 comment:

I've always considered this time of year to be the end/start of my wargaming year - rather than the 1st January which I  find artificial , so I  have been giving some thought to next years wargaming agenda . My main idea is to finish off projects rather than start new ones - Oh yes all my wargaming colleagues have heard this one before BUT  putting it in print may make me stick to it !. My 42mm Imagination Armies are finished - may add odd figures when and if I  come across them . The 54mm 'Funny Little Wars' need more work - I have sufficient 'Red' army infantry  , but need a few more cavalry figures . The 'Black' army needs quite a few more infantry and lots more cavalry - a lack of casting metal and the fact that it is very cold at the moment in the unheated building I cast in has brought a halt to this project  , defiantly one for the Spring months . My 25mm Napoleonics need finishing , I  have lots of figures to paint  but have not played with them much recently due I  think to not having a set of rules I  am happy with . They were originally bought as an 'Old School' type project and although I  have used them successfully with Black Powder and General De Brigade I  think I have strayed from their original purpose - so I am going to have another look at the Charles Grant Napoleonic rules ( this may mean the purchase of extra command figures  for each battalion). The 28mm ACW  armies are nearly finished with only a couple of units to add plus the odd general etc. The two FOW  WW2 Early Desert War armies are almost done and with the purchase of the odd unit or two in the New Year, will be then finished . Been rummaging around in the draws I  keep my unpainted figures in and have found quite a lot of Games Workshop LOTRs figure that need painting . I  have been a fan of Tolkien's books since a child and was very impressed with Jackson's film interpretation, I painted a lot of the figures when they came out and played lots of games (which were always good fun) but have wandered away from them lately, so I should paint the remaining figures up and start gaming with them as well !.Lurking in the background is my 15mm Peter Laing Crimean War collection , if fully rebased it would be ideal for playing with Black Powder . That's enough to keep me going for quite a while - if I can stick to my plans - Ah the frailty of man !- especially the man who wargames ! Well that's enough rambling for now - my main aim in the New Wargaming Year is to buy less lead and get what I  have already painted  - and used !!!. (watch this space ....)
Posted by Mosstrooper at 01:37 3 comments:

Must admit I played this game to test out 'Funny Little Wars' Chance card deck . The positions for units were diced for ,1-5 for left to right, 4 to 6 to arrive on first move. ( click on the photos to enlarge ) 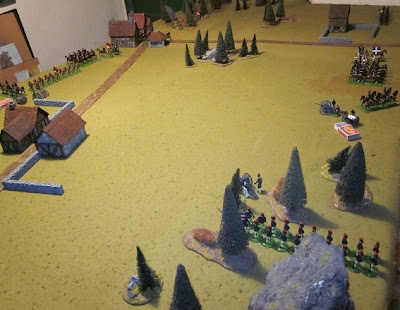 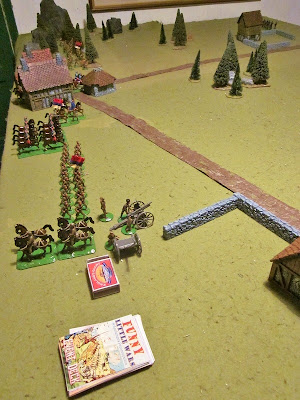 The forces move onto the table. 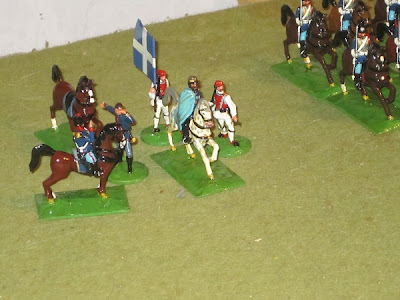 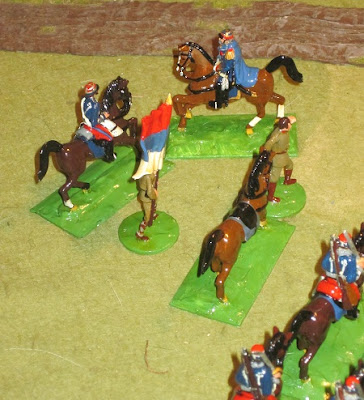 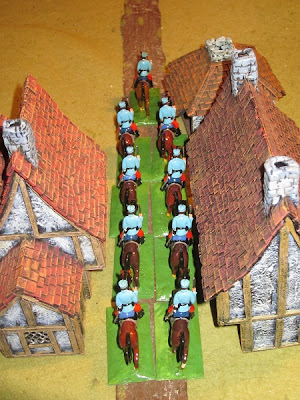 Treborian Dragoons move up through the village. 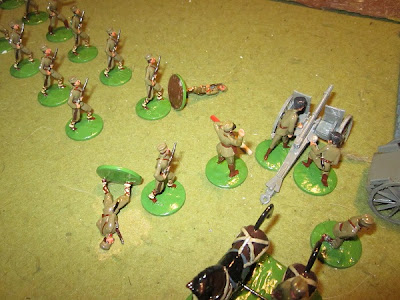 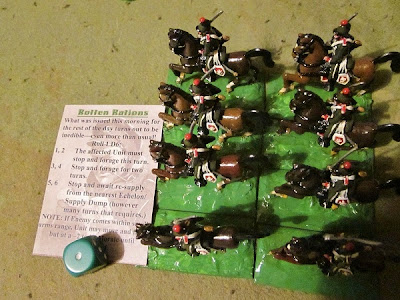 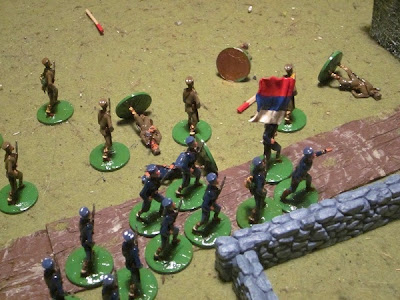 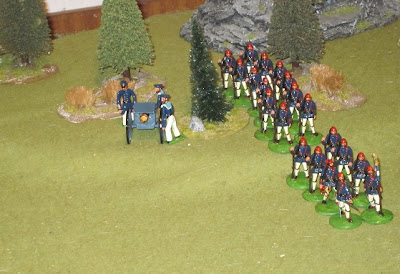 Fetaland Evazones move out of the woods covered by the Naval machine gun. 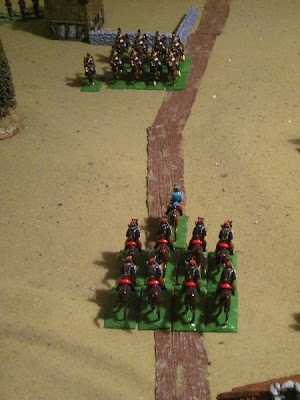 The Elite cavalry units on both sides square up . Too be continued .......
Posted by Mosstrooper at 12:34 6 comments:

Been totalling up my 'what I've painted' scores , total 916 so far . This sounds a lot ! - but it covers a multitude of figure types/scales and periods . I  count 1 foot figure as 1 , a mounted figure as 2 , a gun as 1 , about 3- 15mm FOW figures as 1 and say a 15mm truck or tank as 1 . The 42 mm Irregular Imagination figures paint up extremely quickly with their 'Toy Soldier' style paint job as did their 54mm brethren . I find 25 mm Napoleonic take longer especially the cavalry which I  don't like painting to much - but am always pleased when I get them done . The 28mm ACW have painted up quickly , I  find the plastics no harder to paint than metal . I paint most days for about an hour or so in the evening ( not that keen on TV ) and find it very relaxing as its a total break from my day job (Highway Maintenance contractor). I use mainly Games Workshop Acrylics as they are readily available locally , I use yacht varnish  for my 'Toy Soldier' look and Windsor and Newton varnishes ( matt , gloss and silk) for other figures , I  use artists sable brushes which are expensive ! but I've used synthetic ones and never found any that were any good or lasted as long. Basing is brown Basetex or for larger scale figures Polyfilla . Well back to the painting table . 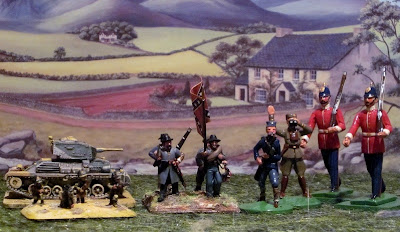 Some of the figures and scales I  have painted this year so far.(click on photo to enlarge)
Posted by Mosstrooper at 11:02 4 comments: