Of The Naming Of Cats And Casting. 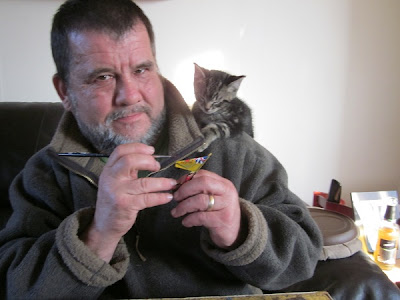 After much consideration it has been decided to re-name our new kitten . Alfred did not suit him and people had started shortening it to 'Alfy' making him sound like a character from 'Eastenders' (a program that annoys me greatly !). So with great deliberation it has been changed to 'Hodge'- after Dr Johnson's cat (the dictionary chappie-18th cent.) , here he is seen overseeing the painting of a 40mm standard bearer- his knowledge of the 18th century British for a young chap is impressive. 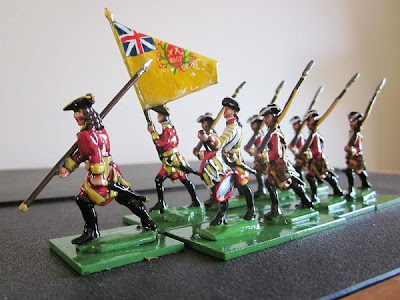 Got some more figures painted and a drummer and standard bearer. 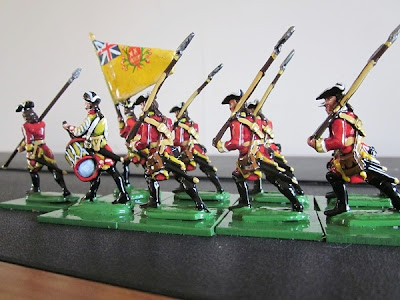 I have mounted them on 30mm x 30mm bases to add stability . 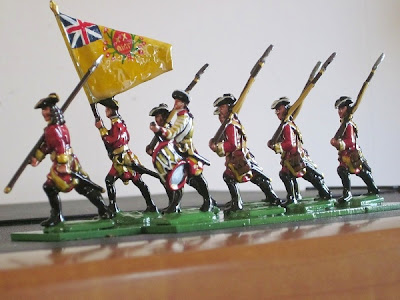 I am going to do some French figures using a different mold to try out colour schemes. I am thinking of using 'Charge' but with a slightly altered organisation. 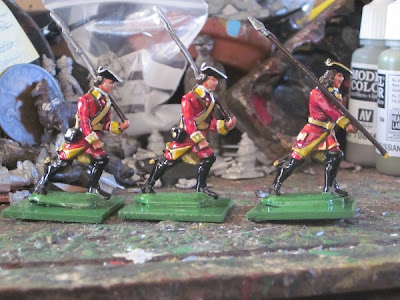 Having cast up some 40mm Prince August SYW figures I decided to paint up a sample to see how they look . Because they are semi-flat I tried a little highlighting to extentuate them , still not sure of the armies - maybe British/French - very traditional (these are British 20th Foote) and am rereading 'Charge' for the rules . By the way the background is my painting tray NOT a aircrash !.
Posted by Mosstrooper at 09:52 7 comments: 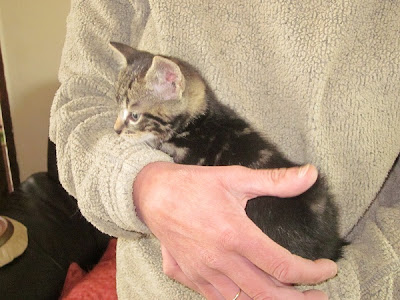 After the sad demise of our oldest cat Mathew at the good age of 16 years , it was decided to replace him with a new cat . Introducing Alfred acquired from a local farm and already causing havoc in the household . He prefers 54mm Imagination figures and I suspect - being a youngster FOW , however he has not yet been given access to the wargaming room. 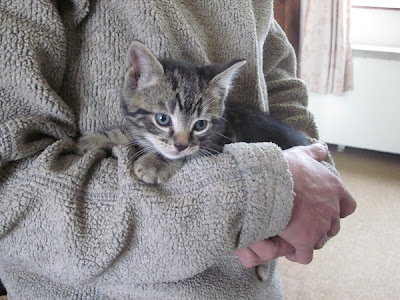 Not Another New Project !? 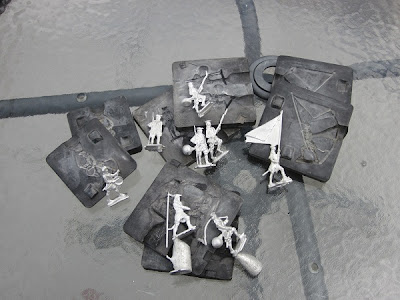 Over the last six month or so I have been slowly gathering up a few Prince August 40mm SYWish figure molds . The first one I got for 50p at a car boot sale (ah the slippery slope !) the others of EBay . I'm not sure what to do with them yet but with the present influx of casting metal I've cast up a few figures from them . 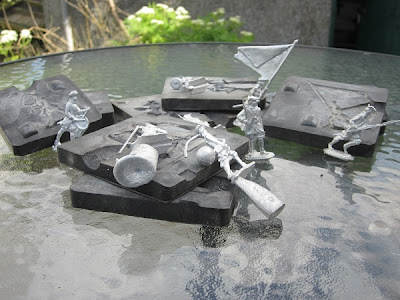 There has been quite a bit of Blogging activity on the subject of this type of figures -
http://ilkleyoldschool.blogspot.co.uk/2012/04/chotustiz-at-triples-preparation.html   and

http://littlejohnslead.blogspot.co.uk/2012/04/battle-of-blasthof-in-40mm-no-2.html have been of great inspiration . Of course I've got SYW  in 30mm Spencer Smith so it isnt logical to do it in 40mm as well - BUT  when did logic ever come into my wargaming !? - and what rules ? Hmm will have to give this some thought !
Posted by Mosstrooper at 10:44 7 comments: 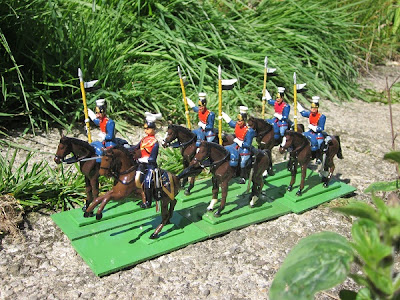 Here we see the first cavalry unit of Army 'Black' , they are the 1st Regt. of Uhlans and are produced from the Prince August 54mm 'Model Soldier' range of molds - think it's labelled as 'British Lancer' . 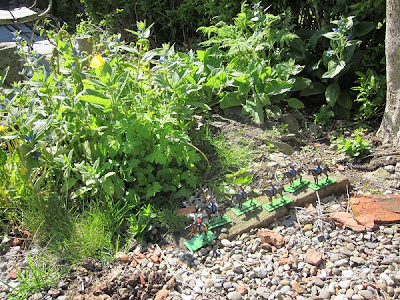 On patrol in one of the rougher areas of the Patio - inspecting the formers site of the 'Gross Redoubt' . 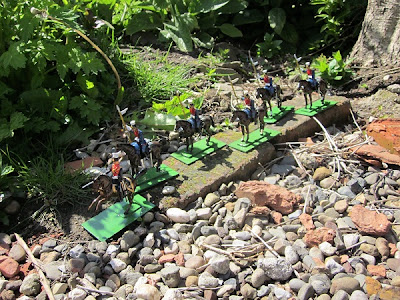 The Officer figure however is a modern 'Britains' figure purchased very reasonably from EBay and given a new paint job to match his men's uniform . 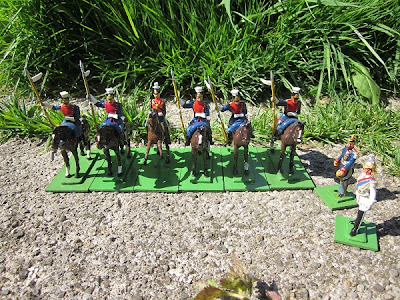 The 1st Uhlans are inspected by Prinz Hertz Van Hyre. These cavalry figures have taken ages to finish off due to the large amount of metal in each casting and the horses (which come in 2 halves- front and rear) can be a bit of a problem to cast perfectly , luckily my wargaming colleague 'A' dropped of a box of metal offcuts for me to melt down so I  got the last one done yesterday and took the chance of today's good weather to do a photo shoot .

The El-Gin Marbles - The Plot Thickens !. 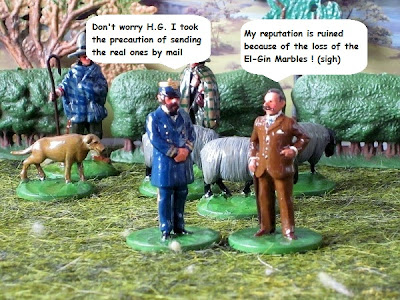 H.G. Wells mourns the loss of the El-Gin Marbles ( and his collection of model soldiers ) ( see-
http://tinsoldieringon.blogspot.co.uk/2012/03/transporting-el-gin-marbles-3.html ) . But Inspector Zapp has a startling confession to make .... (*) 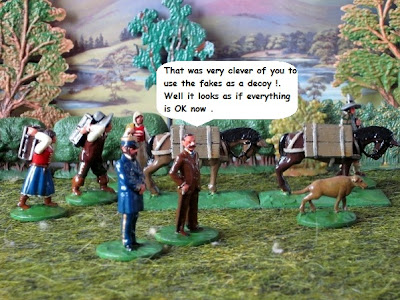 His reputation saved H.G. can now relax ( in the background rural life continues)- BUT  can he ? his American cousin Orson Wells has designs on H.G.s travelling companion Polly. 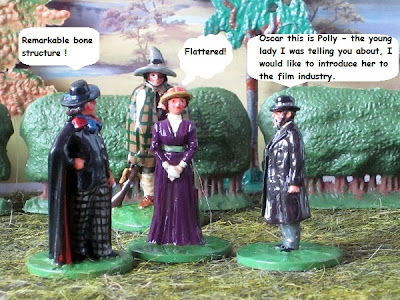 He introduces Polly to some of the 'arty' set that is summering in Treboria , her head is turned by all this attention . 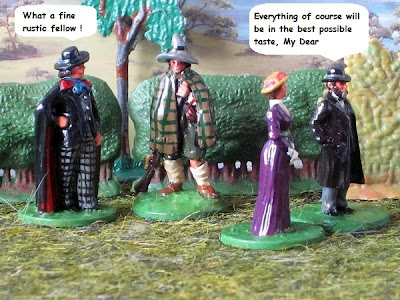 He persuades her to do a film shoot using the Treborian- Ferraro Roccain conflict as a background . We fear he may be up to no good ! Too be continued .........
(* this is how the El-Gin Marbles finally reach the British Museum - although they may be viewed only with special permission due to their somewhat 'racy' nature.)

Posted by Mosstrooper at 05:45 No comments: