Just had a Email from Prince August to say they are issuing some new SYW  moulds , above the infantryman mould with choice of heads .

The NCO and Drummer mould.

The Officer and Standard Bearer. These look very good for the home-caster and are more sensible than some of their recent moulds. 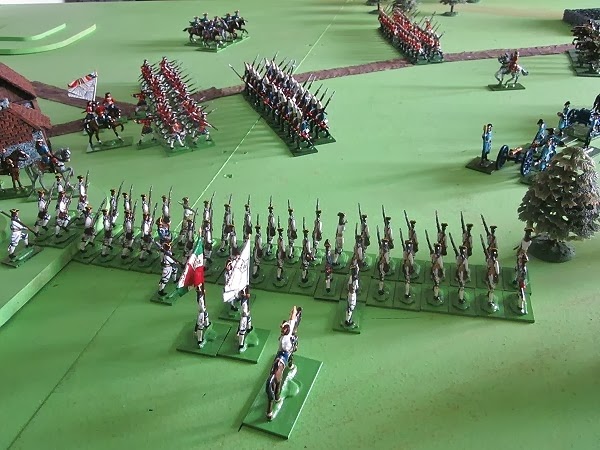 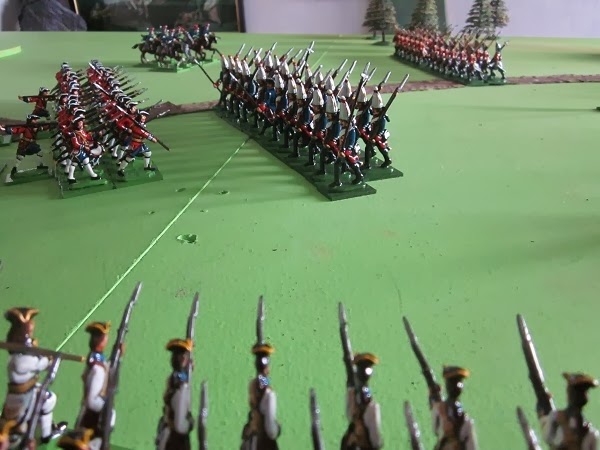 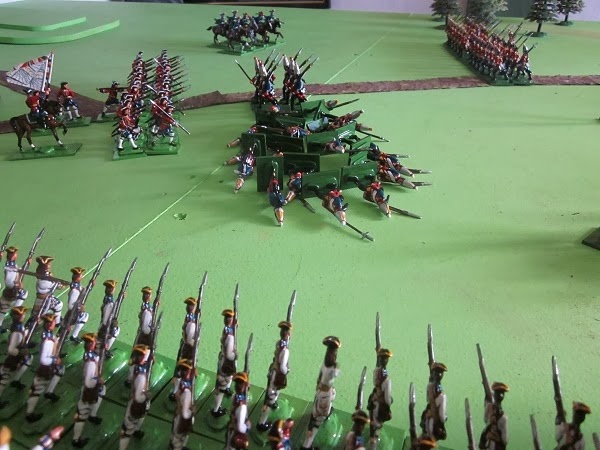 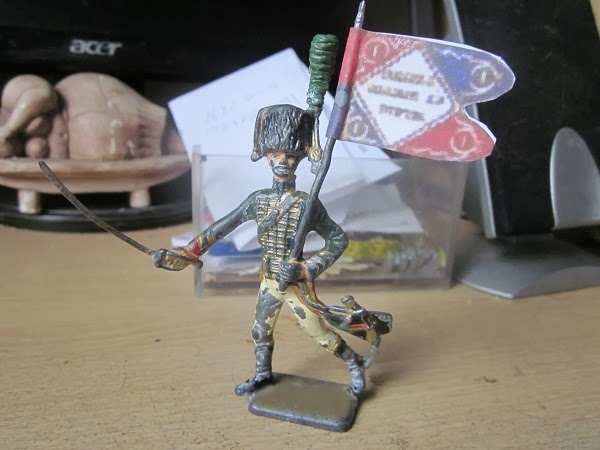 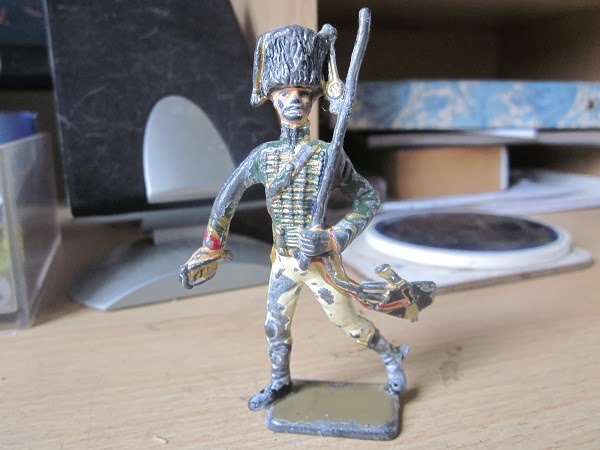 Occasionally I see odd figures on EBay that intrigue me and if they are going cheap I have been known to purchase them . I saw the above figure looking very sorry for himself and nobody was interested in buying him - like a forlorn puppy in a pet shop (bit over the top there Tony !) . He seems to be some sort of Hussar - and rather damaged , whatever he is holding in his left hand is missing as is his sword in his right . I managed to snap off his scabbard try to straighten it out - oh dear ! - repairing him is going to be a challenge ! 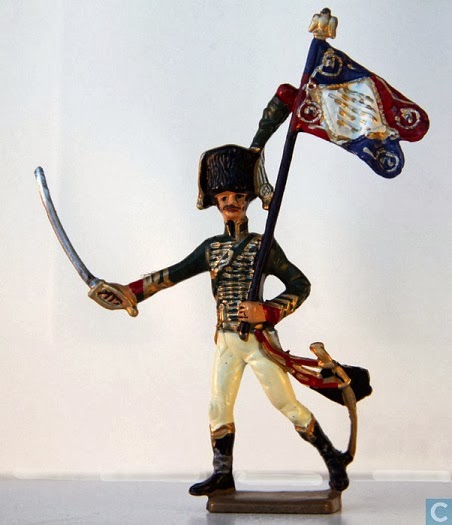 I noticed he had STARLUX engraved on his base and further investigation on the net came up with this figure - !!?, Oh My ! this is getting worse , however I do like a challenge so I  will make further reports of my progress (hopefully) . For people awaiting part 2 of the B.A.R. game - fear not play is taking place and will be posted soon. 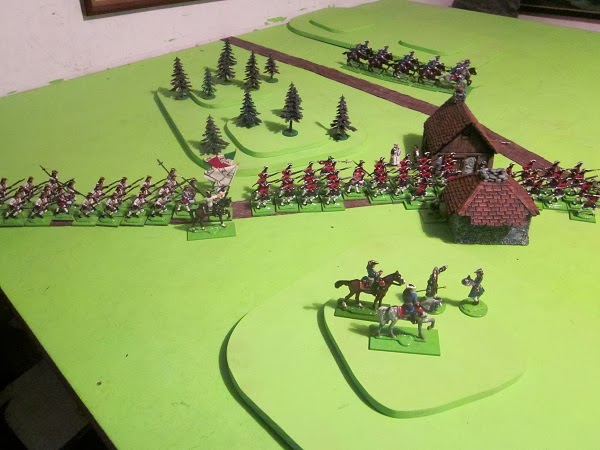 Having had these rules (Battle of the Ancient Regime) for awhile I have decided to give them a try out . I pointed up a couple of small armies and planned a meeting engagement . The French have a Squadron of Hussars and 2 Regiments of Foote. 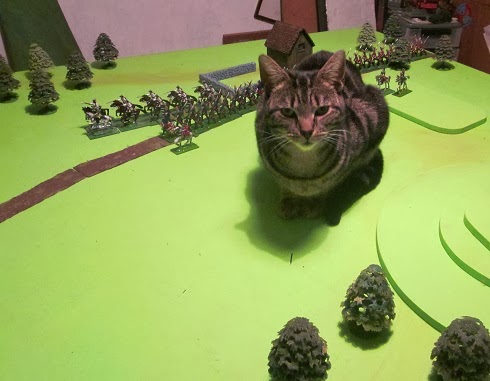 Hodge disapproves of 'new fangled' rule sets and starts a sit in protest. The Allies had a Squadron of Lt. cavalry 2 composite units of Grenadiers and a Lt gun . 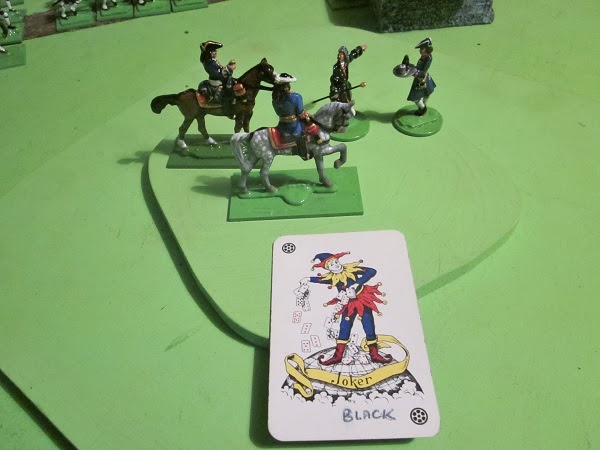 Units are moved/shoot on the turn of a card - black for the French red for the Allies. When a joker is drawn it can be used to preempt opponents moves/firing etc and can be held in hand till needed.The French played their's to move a unit first. 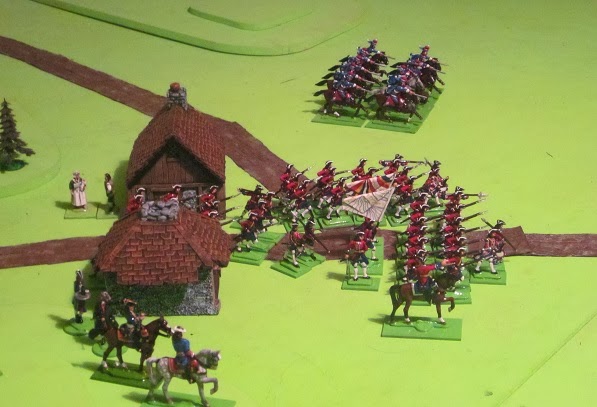 The French deploy having past through the hamlet . 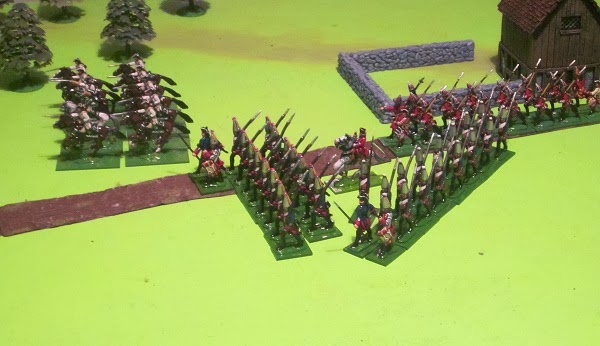 The Allies move into line.The drawing of cards leads to a certain tension who moves next and is great for solo gaming I've always found. 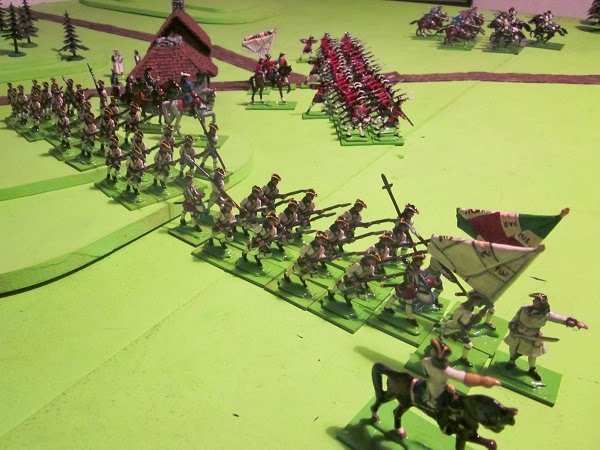 The French move their next regiment up to try and flank the Allies line , in the background the cavalry clash and the Allied Carbineers are routed. 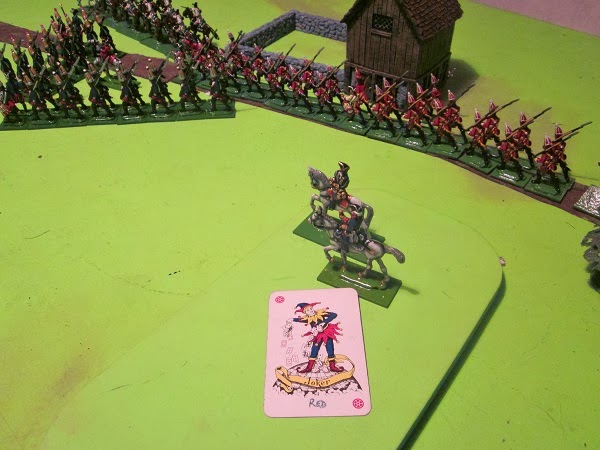 The Allied Command draws a joker and uses it to fire the Hessian Grenadiers first. 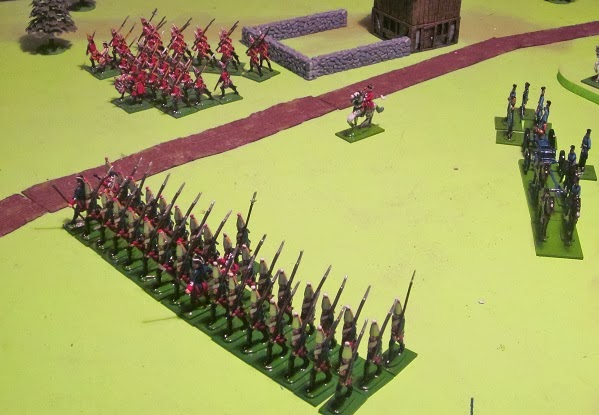 Movement is generous and and shooting distances greater than the ranges in 'Charge', this means things start happening sooner in the game . 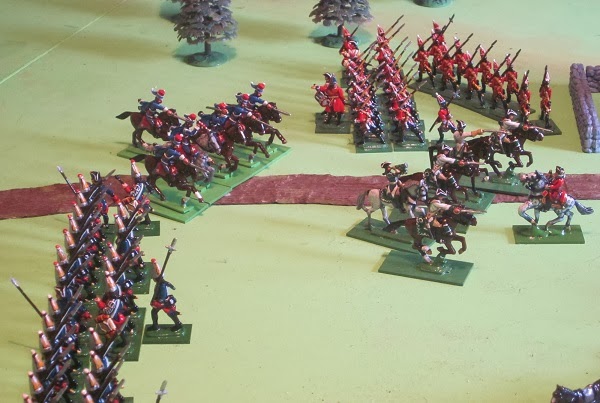 The Allied cavalry flee and are pursued by the French Hussars , unlike in 'Charge' there are moral tests after melees , rout and pursuit move distances are determined by dice throws. 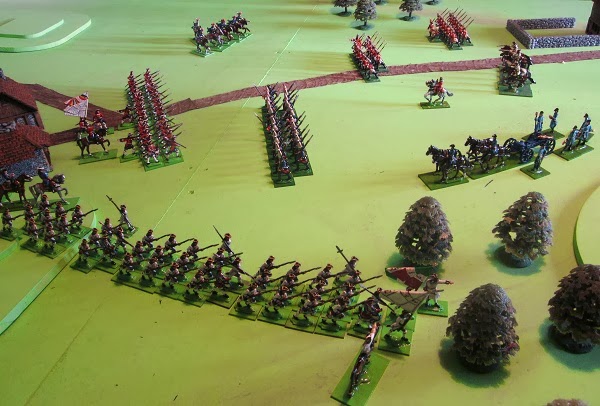 The situation at present, the French cavalry have retire to reform , in the centre the Allied Grenadiers and the French Swiss Regt. are engaged in a fire fight and the French Regt. Du Roi is about to turn to the flank to form a line which will threaten the Grenadiers flank . The Allies are trying to bring up support with the British Grenadiers forming up in the distance and the Artillery is going to deploy to cover the left flank . So far the rules seem to be working okay - you only use the play sheet and consult the rules for the occasional clarification . There are 2 play sheets and which one you use is dependent on your table size , I am using play sheet 2 as my table is 5' x 8'. I'm continuing the game and will report further in the next posting.

A Change Of Rules. 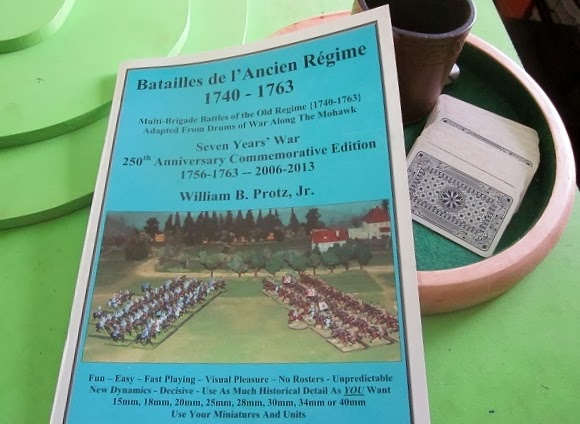 Whilst sorting out the dozens of rule sets I've acquired over the 40+ years of wargaming I came across this set , The sad thing is I don't remember ordering them (first signs of senility ?). I've heard good things about them - they are a slightly more detailed set of 'Charge' type rules , so I have decided to give them a try out . At my time of (wargaming) life I dislike learning new rules but these look simple enough being D6 based and are designed to play just using the 'Cheat sheet' . 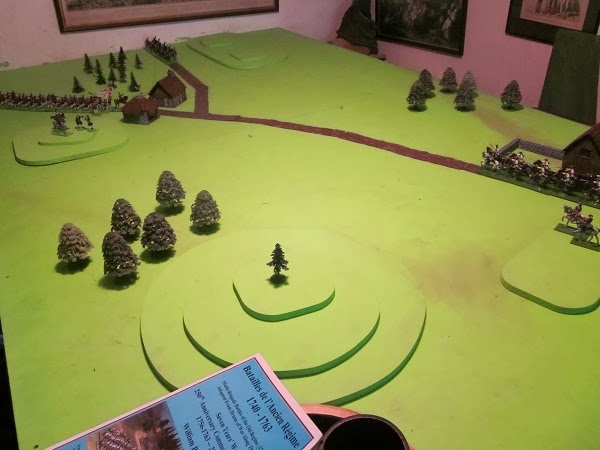 I have set up a small meeting engagement with the Allies coming on to the table in the bottom right and the French top left. 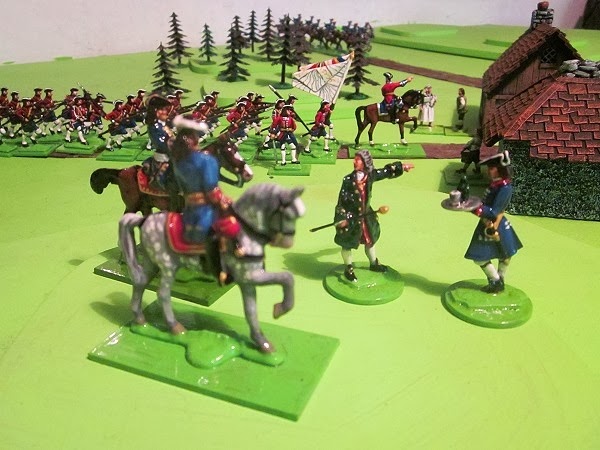 Here we see the French High Command , Count D' Fru-Fru is being given tactical advice by Voltaire assisted by his servant 'Wee Jocky' - I wonder if he will take it ?. 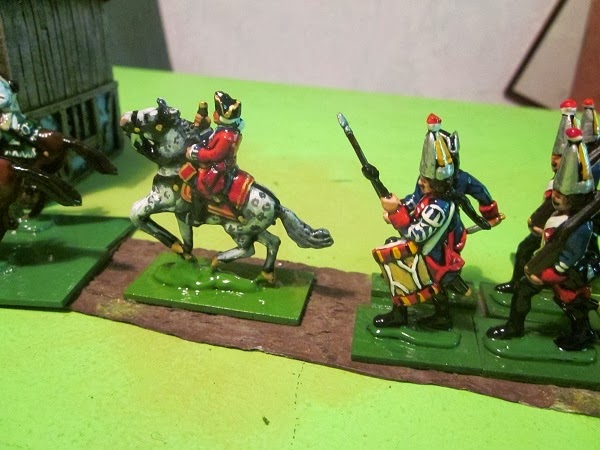 In the Allied ranks is the young Duke of Cucumberland taking part in his first action . I will report on how the rules work in the next entry.

A Box Of Goodies . 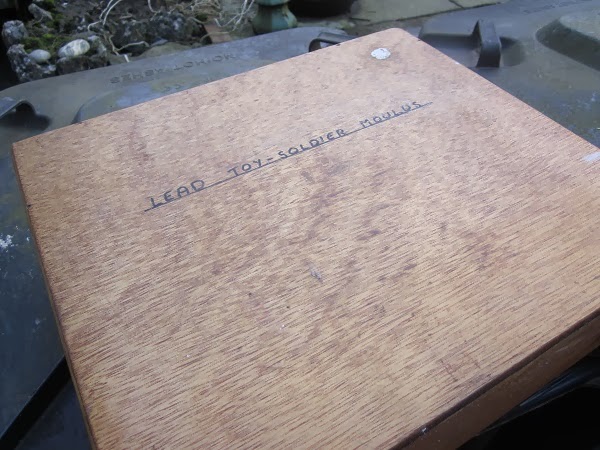 This is the box of moulds I managed to win off EBay at a very reasonable price - nobody else seemed interested in it ?!. 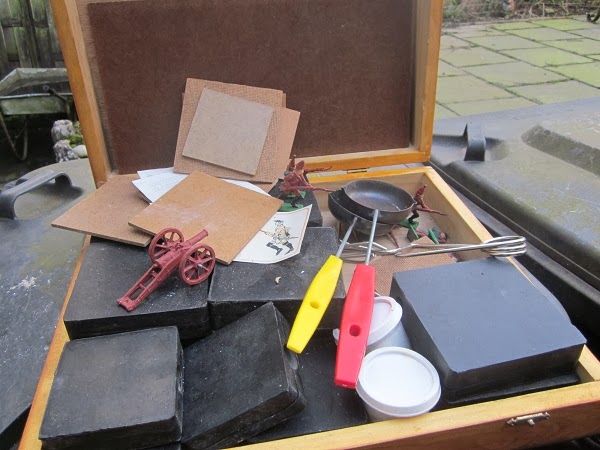 The box of delights opened ! - 14 moulds , clamps , tac in pots , melting pans and even a few castings from the moulds - excellent !. Some of the moulds I have already got but when casting having several of them on the go is an advantage . I've sorted out some more old figures ready to melt down - so its off to the foundry ! 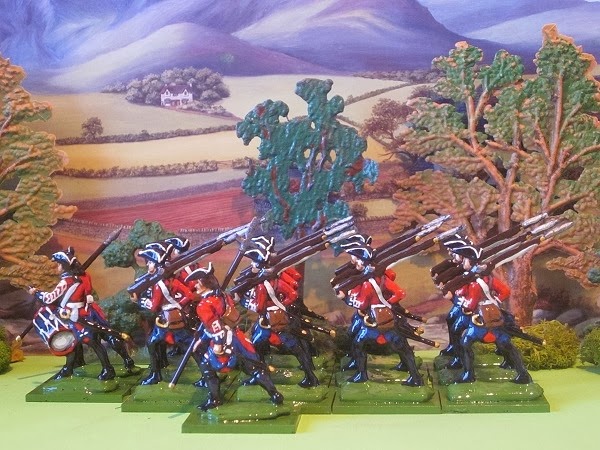 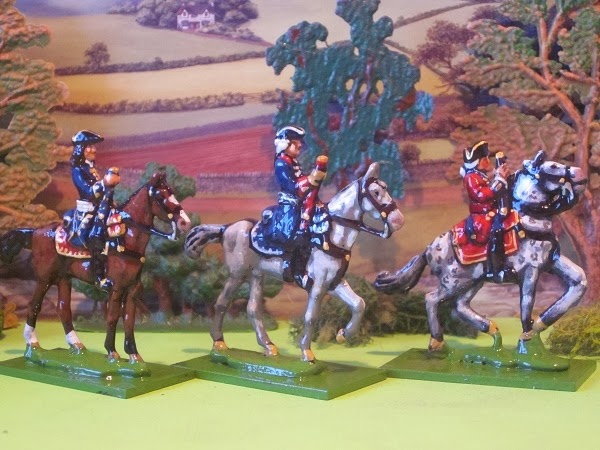 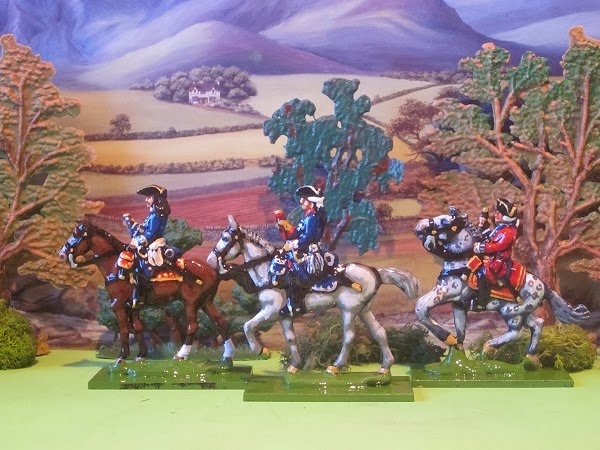