Planning For Next Year.

Its this time of year when I sit down (with a cup of tea and biscuits - of course) and think out what I want to achieve in my wargaming next year. I will continue to build up my 40mm SYW  armies casting up figures and painting them as metal supplies allow, I'm finding this very satisfying and one of the most inspiring thing I've done in my 40+ years of gaming . My 54mm 'Funny Little Wars' has taken a back seat over the last 6 months or so and I need to get back into it and cast up more figures , I also need to make up some suitable terrain for this scale and then I will get to play more games inside on the wargaming table as gaming outside this year has been a total washout due to the weather.To be covered on my other blog http://thesteadfasttinsldier.blogspot.co.uk/ I am starting to do a Old School Franco-Prussian War project using Spencer Smith 30mm figures and Donald Featherstones Horse and Musket rules. I must also get back into playing with my 40mm Imagination (Balkans War) figures - no more to paint in this area although I am tempted by the new 40mm 'Britains' type figures by Spencer Smith - British Expeditionary force ?. Another project I must get up and running is my Napoleonic collection - struggling here with a lack of rules that I really like , but one or two rule sets to try out .Well that's enough to be going on with , will be interesting to see how much I achieve and how many unforeseen ranges of figures and rules intrude ! . Just like to wish everybody out there in 'Blogger land' a Happy Christmas and prosperes New Year . 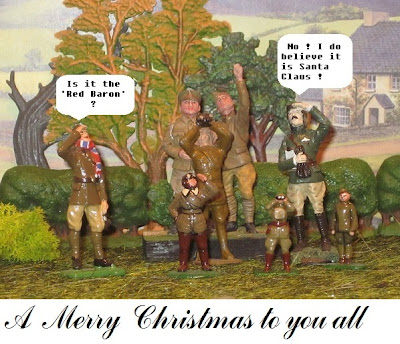