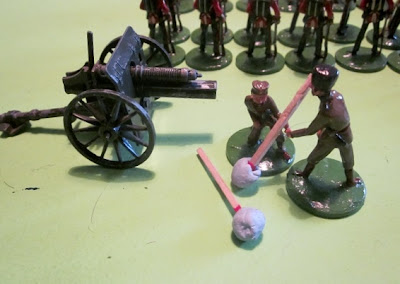 Whilst I was unwell I did some thinking about various wargaming problems (this in its self was a sign I was getting better). One of which was the ammo used in 'Funny Little Wars' - when played outside this is no problem but on the wargaming table the spring powered guns and matchsticks 'ping' ! all over the place !- this is even worse when no felt cloth is used . However the Treborian Ministry of War has come up with a solution - the 'Blu-Tack' sabot head ! , this weights the matchstick and initial tests suggest a vast improvement in accuracy especially at close ranges . Their opponents Ferraro Rocca have denounced these developments as unethical and have filed a complaint to the Geneva Convention about them (whilst hurriedly investigating the possibilities of upgrading their own ammo stocks !). The above photo leaked to the press shows Treborian gunners preparing the deadly missiles.