The British and their allies are keen on taking revenge on the French after loosing the last battle
http://tinsoldieringon.blogspot.co.uk/2012/07/first-contact-in-40mm-part2.html so they decide to attack a French artillery piece that has been making a nuisance of itself  . The attack will take place just before daybreak . 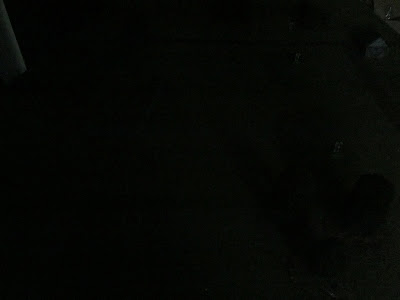 Hmm ! that's realistic but not much good to illustrate the scene of the action . 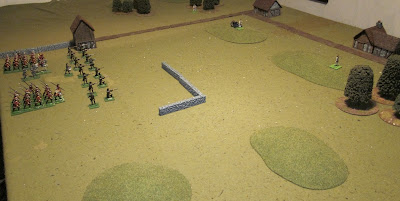 That's better . The Allies are on the left and comprise of the Grenadier Company and Lt Grant's Company of the 20th Regt. of Foote. The lead is being taken by Scheither's Jaeger company. The mission is to destroy the gun and set fire to the ammunition store behind it. 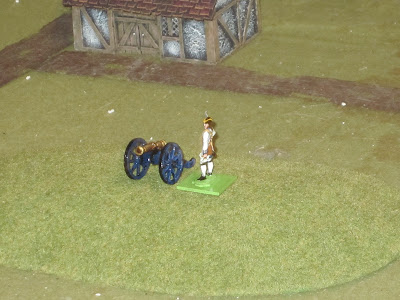 The objective . I cast the three sentry's up especially for this game .(ah ! the joys of home casting) they will move on a random dice throw and alert the camp when the enemy come within 9" of one of them. 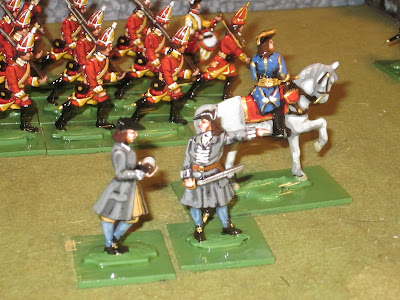 The Allied force is commanded by Gen. H. Von Karlsberg (Col. Barker was wounded in the last game and is indisposed) They also have a Officer and gunner from Scheither's FreiKorps who have a 'Infernal device' to destroy the gun . Too be continued.......
Posted by Mosstrooper at 09:10