The search for the British Envoy (1)

As you remember we last saw Sir Morris Oxford fleeing into the wilds of Ferraro Rocca. Both sides have dispatched forces to find him , also Richard Hannay and a band of partisans are seeking him as well. 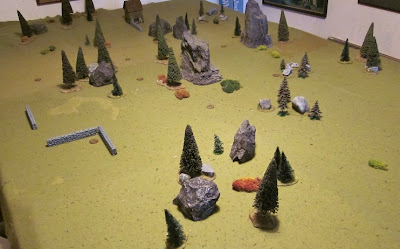 Photo of the area to be searched , the markers scattered about mark the locations of various events/persons . There are 8 of them - 3 blank ,4 other persons/animals and Sir Morris . These can move each turn using 2D6 and a scatter dice, when a force comes within 6" of one the marker is removed and replaced by the event /person . 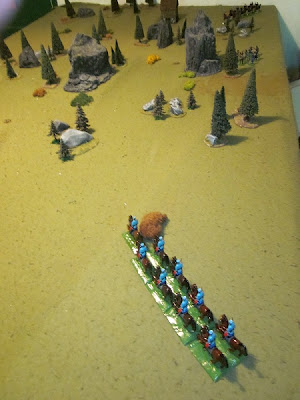 The search parties move onto the table , the Treborians nearest the camera , Richard Hannay and party in centre , Ferraro Roccaian forces in top right corner (I diced for entry points). 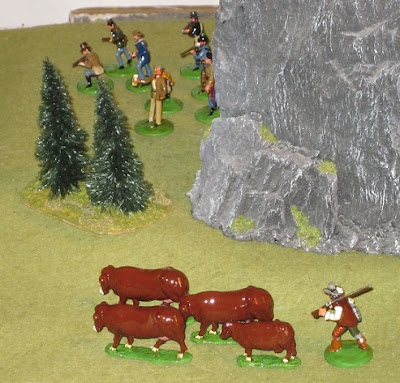 Hannay because he won the last game (Schwartzpool tower) gets to spot things at 12" instead of 6" like everybody else . The first event is enacted and turns out to be a cattle herder and cows . 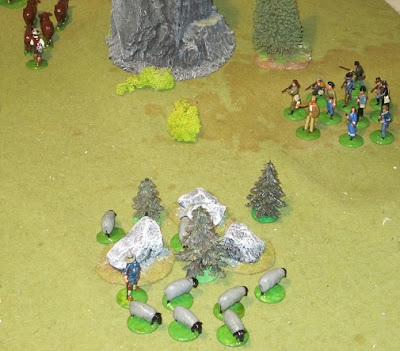 He move swiftly to the next one , which obligingly moved towards him on the scatter dice .
and it turns out to be a shepard and flock . 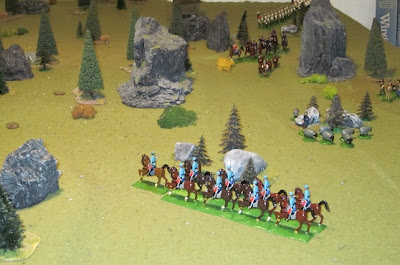 The opposining forces move closer weaving in and out of the mountainous terrain seeking to locate the Envoy , but no luck (every time they got near a marker it moved away from them on the scatter dice and remained out of 6" spotting range). To be continued ......
Posted by Mosstrooper at 01:36