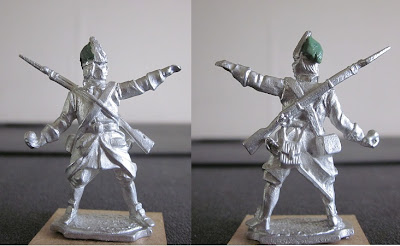 Amongst my collection of molds I have the above figure , purchased as a job lot, it was not one I would necessarily have bought myself as it depicts a Swedish grenadier (I think). As I wanted to do something different for the Frei Korps I wondered if I could convert him , my info on Scheither's comes from Osprey's Frederick the Greats Allies and this has a illustration of the grenadier but not a very good view of his cap (a sure sign the artist is not confident in depicting it) , the text mentions that they may be captured French grenadier caps - so I'm going with this . I have filed the cap down a bit scored the front to look like fur and added a bag from 'green stuff' , I know the grenade throwing stance is anachronistic for this later period but now I've got him cast up I find it cute and different and its my SYWish army so I'm going with him !