First of all I would like to wish all of you out there in 'blogger land' a Happy New Year and secondly to tell of a problem I have - Napoleonics ! . People who know me are aware of my troubles with this period , it's the rules - I cannot find a set I like with which to play solo 'Old School' type games. I do believe that 'General De Brigade' are a fine set and give a wonderful game -but- are not very solo friendly . So I was persuaded by wargaming colleague 'A' that 'About Napoleon ' were the set of rules for me and will solve all my phobias about the period . So I sent off for a set and the special dice for the game ( I like special dice - it was this that sold the rules to me ). 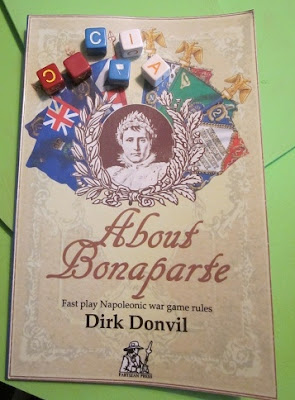 The rules and special dice . These are used in command , shooting and combat and have 2x I , 1x C, 1x A, a Flag, a blank -  I is for infantry, C for cavalry , A for artillery , the flag allows any groups or units to be moved and the blank means nothing happens/casualties etc. Sound complicated but it seems having read the rule its not , Generals and officers roll dice to motivate/command units , units roll dice for firing and combat . The flag symbol in firing/combat means a morale reversal the others remove the appropriate figure types. 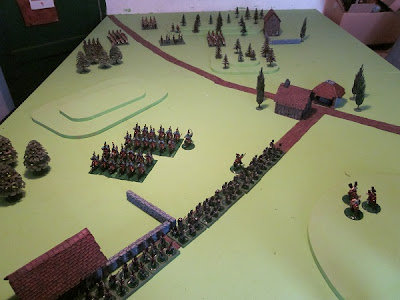 I decided to set up a small game to try them out . An Austrian advance guard is advancing and is confronted with a small Bavarian force (at the far end of the table). 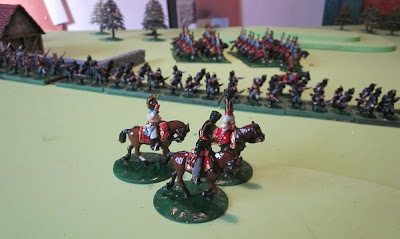 The Austrian commander views his troops move up - Hussars, Jaegers and 2 units of Grenz. 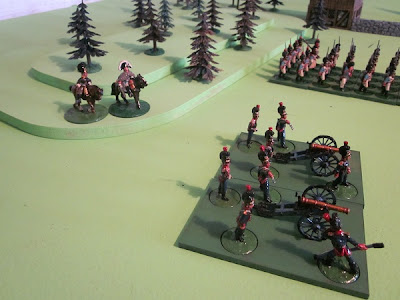 The Bavarian General positions his artillery. 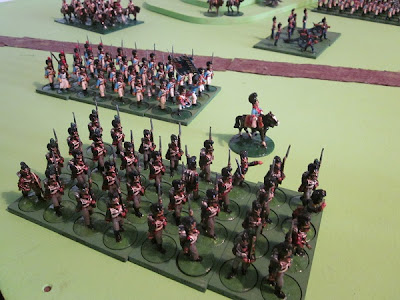 The Bavarian infantry wait in columns . Well I'm off to play a few moves to see how they work , you can read a set of rules as often as you like but until you start playing on the table with them you cannot tell how they will perform ! To be continued......