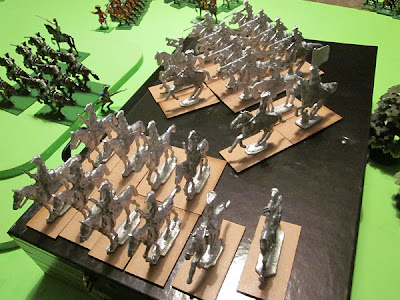 Over the weekend I cast up 2 squadrons worth of 40mm cavalry , using some of the unwanted figures 'A' gave me . The figures at the back of the photo are the second squadron for the French Regt. Nassau-Sarrebruck as well as the H.Q. figures for this regiment. The figures at the front are the first of a yet unidentified Allied heavy cavalry unit . 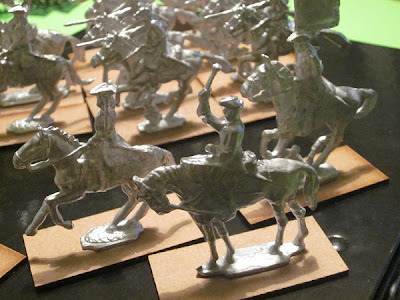 The Nassau-Sarrebruck command - the kettle drummer is SOOOO cute ! 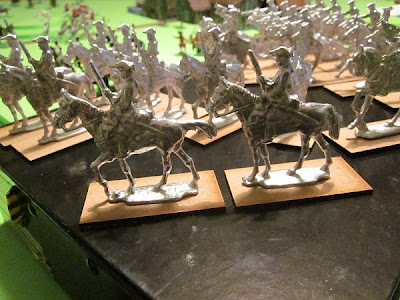 The basic figure for the new Allied regiment . Cleverly the mold produces a horse with 5 legs and 2 tails ! , which of course you remove one of the legs and one of the tails allowing for variants . I cast the figures in three sessions over the weekend , it took this long because of the number of miss casts which is higher in cavalry figure molds and the weather being cold (the snow finally arrived) which causes the camping gas stove I use to burn poorly - something to do with the liquid gas and the cold - I remember in my youth camping in cold weather and having to take the small gas canister into the sleeping bag to keep it warm so that in the morning you could brew up tea. I have the pleasure now of selecting the unit for the next Allied cavalry , was going to make it British but not sure, at moment it may be one of the German states, going to start thumbing through my Osprey books .