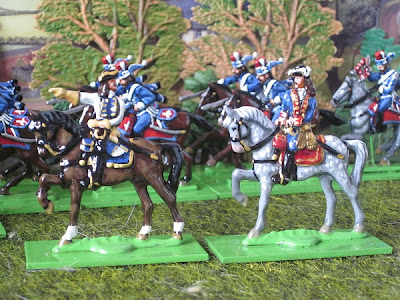 The French have a new commander in the shape of Le Comte De Fru-Fru. here seen being shown the troop positions by the commander of the Regt. De Roi -  Lt.Col.Canonbert . The Comte has been put in charge after the Allies managed to destroy a prized cannon and plans to take the fight to enemy and show them who is boss ! ( Canonbert privately doubts the military abilities of the young C in C ). The Comte is another conversion from the basic pointing mounted command figure . The right arm being cut off and remodelled and the head cut off and refitted the other way around.