Adventure at the Schwartzpool Tower

The intrepid British spy Richard Hannay seeking the where abouts of  Sir Morris Oxford after his escape from imprisonment in the Schwartspool tower decides to explore the area around the tower for clues . He has with him 4 trusty companions . Unfortunately the evil Ferraro Roccain Major Velkro has the same idea ! and has brought with him Mata Hari the beguiling female spy and 2 guards .

They set off into the woods looking for clues . For this game I am using '.45 Adventure ' a set of Pulp type game rules for small heroic actions. There are 6 encounter locations on the board (marked by scenic based 2ps ), these have been placed at random and upon investigation reveal a clue, an event or even nothing !. The parties set off to investigate . 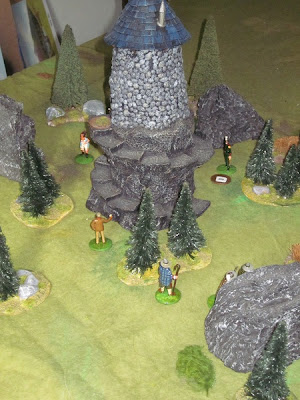 Major Velkro finds the first marker - but it reveals no information !(a sweet wrapper). 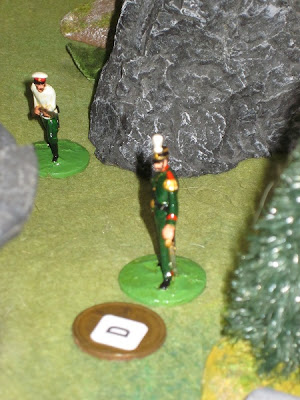 Richard Hannay rushes forward to investigate another clue , but as he tries to decypher the cryptic message he is confronted by the beautiful Mata Hari and is beguiled ! and shot twice in the arm by her !. 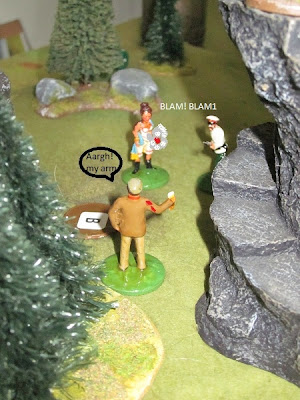 Whilst looking at his clue Velkro is seen by one of Hannay's companions - who tries to shoot the evil genius - but his gun jams ! 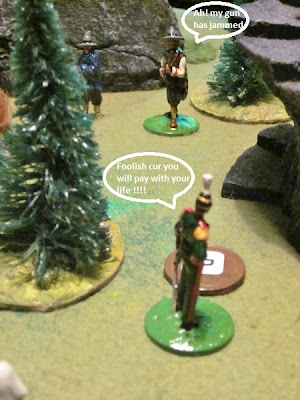