The world is astounded by the shocking news that the British Envoy Sir Morris Oxford has been captured by a Ferraro Roccaian raiding party. Sir Oxford was on a fact finding mission to Treboria and was traveling in the State Steam Carriage with a escort provided by the Treborian Army . Whilst on route to the capital of Treboria the party where attacked by a strong enemy force and although  reinforcements tried to help and drive off the attackers , they where unable to prevent his capture !. Ferraro Roccaian  sources are reported to say that Sir Morris Oxford was in fact on a mission to sell more arms to the Treborians and not on a cultural tour of 14 century monasteries . This was a game that was played recently with a wargaming colleague S . We used the old favorite 'Wagon Train' scenario by Charles Grant , it was the first time S had used the 'Funny Little Wars' and he had great difficulty mastering a match firing cannon . 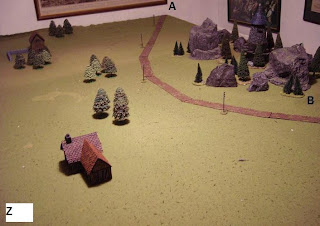 Sir Morris party where traveling from A to B  . Enemy forces come on at points X Y Z . Reinforcements for the Treborians come on at B , all are introduced to the game on dice throws 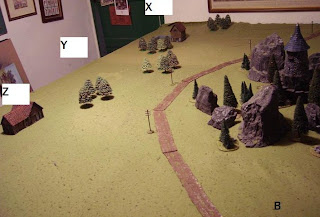