Before the game we rolled for the position of forces entering and on which move they appeared . S diced = Black Hand unit Z on 5th move , Cavalry unit X on 4th move, Infantry+gun Y on 3rd move, Militia unit X on 6th move. My reinforcements came on at B on 5th move . 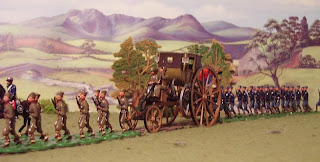 The journey started off uneventful , but soon Ferraro Roccaian infantry and artillery where attacking the leading unit . S new to matchstick guns shot badly but his infantry were better shots and the Treborian infantry were in trouble . The column stalled and FR  cavalry entered the table and started to move to attack the rear of the Treborians . More photos and the next instalment soon .
Posted by Mosstrooper at 12:53