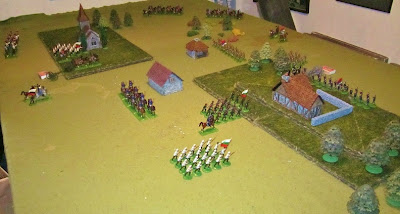 This is the situation on move 2 . I am trying out one or two adaptions to 'Funny Little Wars' to alter it for tabletop use ( the original being designed for outdoors) . I have started using random movement distances - Infantry in line = 2xD6 , in column or skirmish = 3xD6 , half the distance for rough terrain , Militia/Reserve infantry re roll the highest dice (represents their lack of enthusiasm). Cavalry roll 3xD6 - better horsemen (ie Hariboan lt cavalry) re roll the lowest dice (better horses) , Both troop types add 1xD6 on roads and charging . Artillery move 3xD6 . 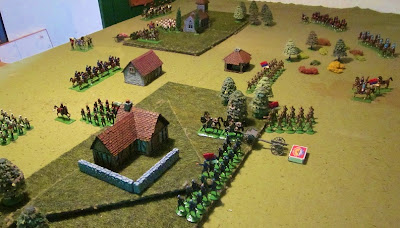 By move 3, both sides moved troops to control Hook's Farm and the Treborian Cavalry made a right flank march to attack the Ferraro Roccaian left around Firefly Church . No firing took place . 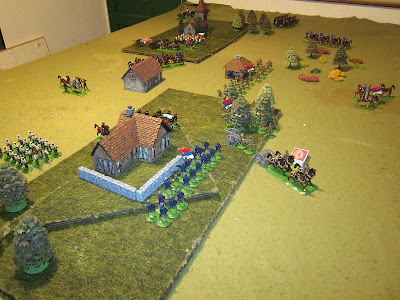 The Treborian Reservists moved up hill to the farm and the Treborian gun hurriedly unlimbered as the FR  infantry column came over the hill crest. The Ferraro Roccain gun and infantry deployed next to the church and the Hariboan Lancer moved to counter the Treborian cavalry flank move . 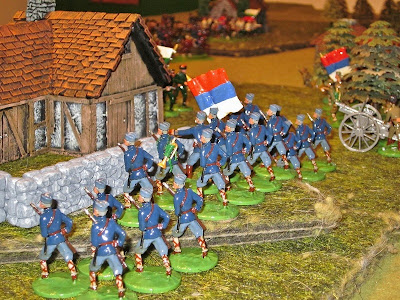 The Teborian CinC rushed a infantry column up through the wood to support the artillery . 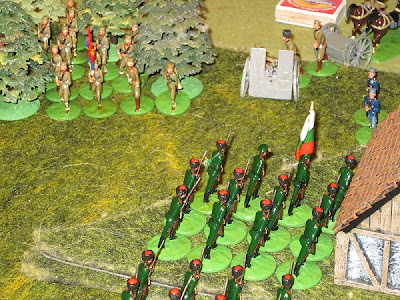 On move 4 the FR column charged its opposing enemy column , but failed to reach it - the Treborians counter charged but after 2 moves of melee were beaten back . 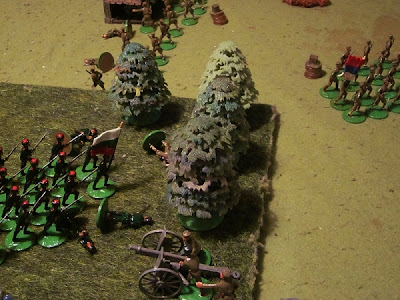 The Treborian gun dare not fire in fear of hitting friendly troops , things are not looking good for the Treborian Reservists as they are being out flanked on both sides .

This is the situation on the Treborian left at the end of move 4 , over on  the othr flank , troops deploy and the Lancer prepare to charge the advancing Treborian cavalry. 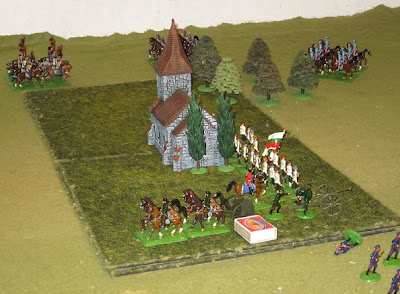 Apart from a little skirmishing  in the centre there had been no firing , but with the troops deployed I expect it to  change in the next move ...
Posted by Mosstrooper at 12:48