Just been re-reading what I wrote about this time last year , some of it has been achieved and some not. The casting up and painting - and playing with my 40mm SYW  armies has continued apace and I have been looking through my 'lead mountain' and have a box of unused figures that will be melted down and cast as more 40mm figures. The Allied army will have more artillery / limbers and another British unit - 18th Foot (Royal Irish) , the French/Saxons some more cavalry, I also fancy doing some Engineers and wagons for both armies which would be useful in many scenarios . My 40mm Imagination (Balkans) have not had much of an outing, but I plan to slightly enlarge the cavalry units and provide more dismounted cavalry figures - and play with them more ! . The Napoleonic collection has been mostly rebased but has NOT  been used this year - sigh !, I MUST  get to grips with this period and start using them. The 54mm Armies have not been used as I lack scenery for them and a puppy and the weather have made playing outside with them impractical . I am looking forward to the next years gaming and will continue to report on my progress (hopefully) Here's to 2014 ! 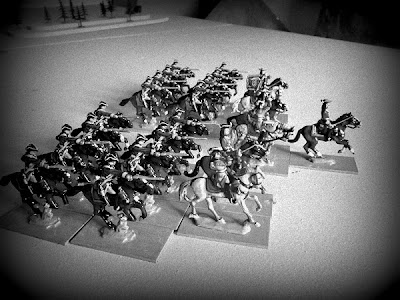