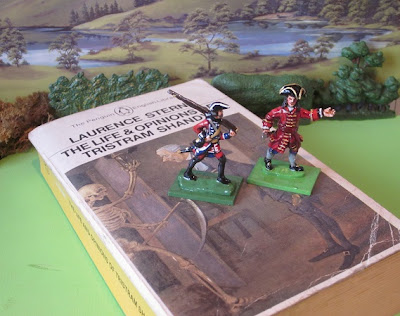 Several blogs ago -(http://tinsoldieringon.blogspot.co.uk/2013/01/an-aside-personality-figure.html) in fact, I mentioned modelling Tristram Shandy's Uncle Toby and since then I have been casting around for a suitable figure for his batman Corporal Trim . I finally decided on a old Holger Erikson mold I got off a car boot sale which seemed suitably 'old soldier' and so both characters appear above on my battered and still not read copy of 'Tristram Shandy' . 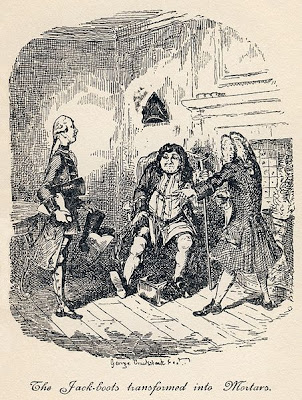 I have tryed to find a illustration of the gallant Corporal and the only ones I have come up with are by George Cruikshank .
I have also come to the conclusion that Corporal Trim was maybe the original military modeler ! - note the above 'Smoking Battery' and converting the antique jackboots into mortars ! - if only they had acess to 40mm figures ! what might have been acheieved ?.